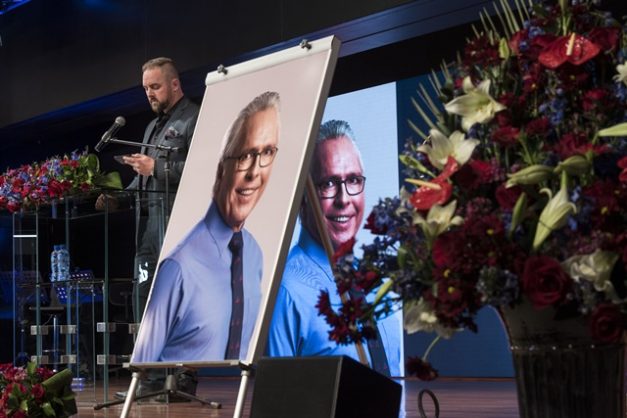 The reason for this could be natural causes, or foul play, but the family says it’s at least a comfort to them that suicide has been ruled out. According to the preliminary conclusions of a private pathology report sent to Gavin Watson’s family this week, the late CEO of Bosasa was already dead before his vehicle hit the pillar. As a result, suicide has been ruled out by the private pathologist hired by the Watson family. This revelation was revealed earlier on Sunday in a report in Sunday World, and which The Citizen confirmed with the family on Sunday evening.

The conclusion about Watson’s death was reached based on the fact that the body didn’t show signs of “significant trauma” despite Watson’s Toyota Corolla smashing into a concrete pillar on the way into OR Tambo Airport at a speed above 80km/h.

His face wasn’t badly damaged and there wasn’t much bruising either, despite initial reports that Watson may not have been strapped into the driver’s seat. There wasn’t nearly as much blood on the scene as was expected, based on the fact that an artery in Watson’s neck was severed, presumably by the crash, which vehicle data suggested took place at between 80km/h and 100km/h.

“The vehicle’s speed was constant over these five seconds, and did not accelerate. As such, reports that the vehicle was accelerating, and that it was travelling at a ‘massive speed’, are both confirmed to be false from the data of the vehicle.

“We are also told that, at high speeds on that bend, the vehicle would have struggled to keep control and we would have then expected to see markings on the white line of the road, which were not present on the scene of the accident.

“We have further information to suggest the ‘eyewitnesses’ were bribed to make statements contrary to that, suggesting that the vehicle was travelling at a high speed, was accelerating, and driving recklessly. None of these statements are consistent with the data from the vehicle or accident scene,” said the family member.

Earlier this month, the family said they were not happy with the way in which the accident was handled by authorities. The questions surrounding the crash prompted them to hire a private car crash investigator as well as a private forensic pathologist, who sent them the report confirming that, in their view, the crash could not have been suicide.

They claimed Watson’s belongings from the wreck were not placed in an evidence bag, and did not undergo any forensic testing.

Other alleged inconsistencies included Watson’s glasses, which were undamaged, and the fact that so little blood was found despite Watson being on blood thinners.

Possessions found at the scene included R70 in Watson’s wallet, as well as his ID card and driver’s licence. He had no luggage or passport with him, and no cellphone. It was later determined that the phone was missing, and was tracked to within a 50m radius at a location in Bryanston. The family does not believe it will ever be recovered.

The family was also demanding to be shown the photos taken at the accident scene, to determine whether the area where the car ended up was properly secured.

There had been much speculation on whether Watson crashed into the bridge pillar on purpose to commit suicide, since there were no brake marks on the tarmac, or whether he suffered a heart attack or other medical problem, or even whether he was murdered.

The area on the road at which he crashed isn’t covered by CCTV footage.

“From Gavin’s body a number of observations have been communicated to us. Gavin didn’t appear to have any significant blunt force trauma to his face or head from the accident, with very minimal bruising.

“He had a deep laceration on his neck and his aorta was severed. These injuries could have occurred as a result of the accident.

“Given the speed at which the airbag comes out, and the sudden stopping of the vehicle, the stresses on the body, even at lower speeds, can cause the aorta to sever as it did.

“Furthermore, the laceration on his neck appeared consistent with being caused by the seatbelt at time of impact. However, Gavin was not wearing his seatbelt.

“As such it would appear that Gavin was already dead, or that his heart was not functioning at the time of impact of the vehicle “There was no evidence of his own medications being in his system, but we are still waiting on the state for toxicology results for the presence of poisons, etc.

“There is another thing that occurs in accidents: What they call brush abrasions. There are similar to carpet/grass burns on the body … what they call parchment abrasions. Generally these seep blood and tissue fluid, but Gavin’s were dry.

“Those factors: no significant blood in the chest cavity, no significant blood from the neck, and dry brush abrasions, seemed to confirm what the pathologist suspected … that Gavin was dead or that his heart was not functioning already before impact,” said the family member. The accident happened a day before Watson was due to testify at a Sars tax inquiry in August.

Rumours had circulated regarding a Guernsey offshore tax haven, where Watson apparently stashed as much as half a billion rand. Gavin Watson’s nephew Jared earlier this month rubbished these claims, and told The Citizen at the time that, according to Watson’s passport records, his uncle had not even travelled to the UK in the past decade.

Although the family member who spoke to The Citizen admitted they could not prove the suspicions and were just expressing a personal view, foul play was not out of the question. Why was Gavin in the vicinity of the airport? Most likely for a meeting, but no one has come forward to say they were meeting him, which is troubling.

“Why was a dead man’s phone moving from Germiston to Bryanston at 8pm at night?” the family member also asked, referring to Watson’s missing cellphone. “No vagrant does that.” The family member stressed, however, that the reports were preliminary and it would be best to wait for the final findings, which would include information such as toxicology data. It may have just been a heart attack that caused the accident, but that does not answer some pretty key questions, including how he would coincidentally have just had a heart attack at the one section of road not covered by cameras.”

Former DA leader Tony Leon is among those calling for the SA Human Rights Commission to act against the EFF leader.

Growing outrage has followed a pinned tweet from Economic Freedom Fighters (EFF) leader Julius Malema, which consists of a slide show of quotes from founding Zimbabwean president Robert Mugabe, including one which reads: “The only white man you can trust is a dead white man”. Read more

Related Topics:Gavin WatsonGavin Watson was already dead before his crash
Up Next