Coming up on The Queen this September 2019

Harriet realizes she has to handle her enemies, before Kagiso does. Mmabatho and Shaka make a vow to each other. Jerry and Amo have a heart-to-heart.

Kagiso uses his injuries as smokescreen for his plans, Jerry makes a shocking announcement to Vuyiswa. Zodwa and Brutus pick up where they left off.

Kagiso’s revenge plot thickens. Skhumbuzo plays the Khoza’s against each other. There’s smoke and fire in the Maake house.

Harriet’s plans to get back on top are dealt a huge blow. Jerry gets his medical results back. Gracious finds a way to make some money out of the Khoza feud.

Kagiso has a nasty surprise in store for Shaka and Brutus.

Harriet and Kea search for Kagiso, Shaka and Brutus. Will they get there in time? Thato does his best to steer Corner House through a rough patch.

Kagiso’s actions force Harriet to get creative in her negotiations with Brutus. Sthembiso, hatches a plan to entice Jerry back to the police force. 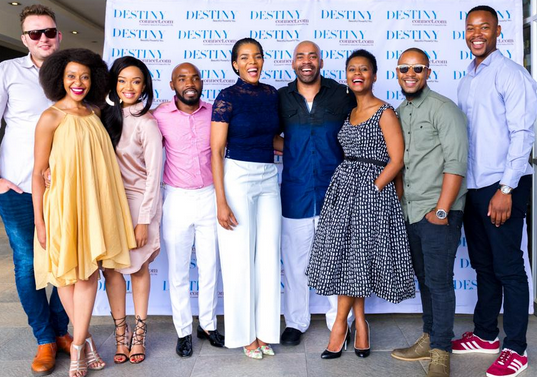 An excited Jerry gets a shock when he returns to work. Kea is ready for new beginnings. Patronella looks for more job opportunities.

Kea’s fashion launch might be headed for disaster. Jerry wants to get back out into the field but unfortunately he is the only one who thinks he is ready. Patronella keeps everyone at Corner House on their toes.

Kea’s launch does not go according to plan. Jerry sneaks a brief stint in the field, creating trust issues between him and Sthembiso. Thato finally finds a replacement for Martha, but is she what she claims to be?
Monday 16 September 2019
Episode 36

Vuyiswa makes a decision that puts Jerry’s life in danger. Brutus and Zodwa put the pressure on Shaka to pick a Khoza side. Kea makes a bold business decision, overriding Kagiso and Harriet.

Harriet is not happy with Kea’s suggestions for moving the business forward. Vuyiswa and Jerry find themselves having to explain their actions to a fuming Sthembiso. Siyanda gets a scathing blast from the past.

Jerry is put to the test. Harriet is backed up against the wall, she pays Skhumbuzo a visit. Zodwa continues to fight for her family.

Zodwa is livid when Mmabatho interferes with her plans. Thato catches Siyanda in a big lie. Kea risks all to prove her worth.
Monday 23 September 2019
Episode 41

Kea has another hair raising experience at the airport. Jerry has a surprising reaction to Siyanda living in the Maake house. Gracious cooks up a plan to get back into business.

An old enemy resurfaces as Kea, Kagiso and Harriet prepare for the launch of Kea’s boutique. Brutus finally agrees to meet with someone from his past.

Gatecrashers and nosy journalists threaten to derail Kea’s launch once again. Shaka pulls Brutus out of the dumps and they finally make up.

Kea tries to convince Harriet and Kagiso that she’s come into her own. Gracious is furious with how Harriet is treating her. Siyanda continues to puzzle everyone with her behavior.

Brutus and Zodwa find a new way to get a Harriet. Kea has a shocking counter proposal for Goodness. Friction with Thabiso’s mother results in Siyanda betraying Thato.

Gracious switches up her game plan to rise to the top. Kea’s efforts to prove herself to her family are snubbed yet again. Thato finds his stolen money.

Coming up on 7de Laan this September 2019: Monday 2 September 2019 Episode 4647  Connie makes a spur of the moment decision. Mariaan tries to wangle her way out...
Read more

S’khaleni surprises his wife with a special treat and big dreams about the future. Phumelele struggles to come to terms with what she has...
Read more

Coming up on Scandal! this September 2019: Monday 2 September 2019 Episode 3379 Chumani is intrigued when Yvonne makes him an attractive offer. Romeo is grateful for...
Read more

Qhabanga and Nkunzi place each other at death’s door - one of them has to die. Khathaza and MaNgcobo have to reach an agreement...
Read more
- Advertisement -