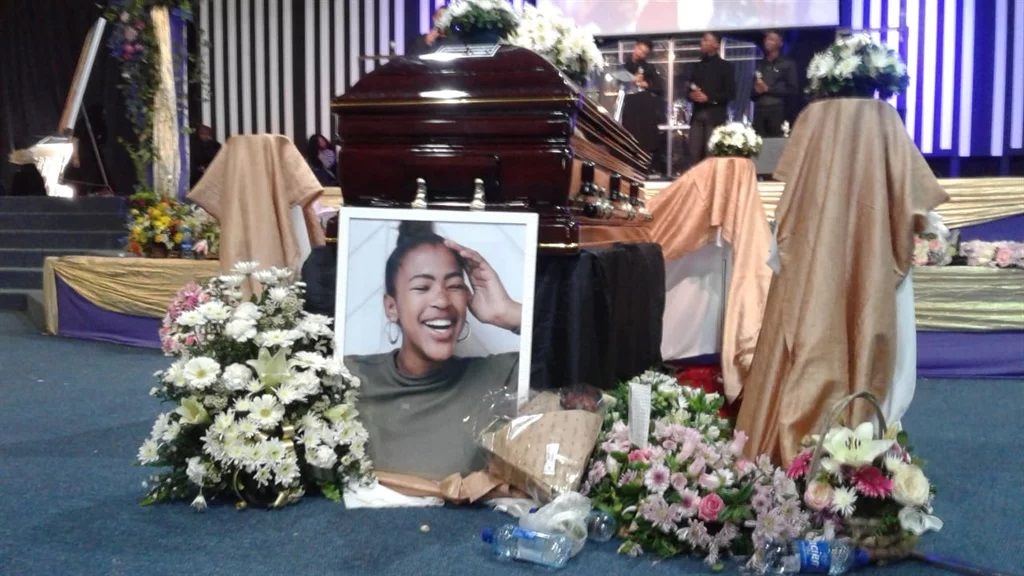 Tears flowed at the funeral of Uyinene Mrwetyana, the UCT student who was raped and murdered, allegedly by a Post Office employee in August.

Friends, politicians and family paid tribute to the 19-year-old whose missing person case, and subsequent rape and murder shook the nation.

On Monday, in a Cape Town court, it was tragically confirmed that the body of a woman found in Khayelitsha was that of Uyinene, the film and media student from the University of Cape Town, who had been missing for a week.

A 42-year-old suspect, who works at the Post Office, was arrested on last Saturday in connection with her disappearance. He was subsequently charged with murder and rape on Monday when the body was confirmed as Uyinene’s body.

She had last been seen alive at the post office, where she told friends she had gone to collect a parcel.

At her funeral, Uyinene’s parents and siblings paid a warm and heartfelt tribute to their loved one.

Collectively, the Mrwetyana family told mourners they were sorry they were not their to protect ‘Uyi-Uyi’ as they fondly called her, and promised they would pick up the baton and run with it.

Uyinene’s mother, Nomangwane Mrwetyana, committed to starting a foundation in her daughter’s name to protect women against gender-based victims.

“I am sorry that I warned you about all other places, but not the Post Office. I am sorry I was not there to protect you and fight for you my girl.

“I promise to take the baton and continue to fight the gender-based violence,” said Mrs Mrwetyana.

Earlier, she had recalled how outspoken her daughter was, while she was the timid quiet one.

“I will miss your outspokenness, you were the one that forced me to speak. She would say ‘thetha mama, vula umlomo wakho, uthulele ntoni (speak mom, why are you quiet)’.

“You were a people’s person. You were an explorer, very different from me. You would call me boring. Stylish young lady with an eye for beauty, yet unique clothes. Her dad would say ‘uyi Style mntanami Uyi Uyi (you have style my child)’,” said the mother.

Uyinene’s older brother, EsonaMrwetyana, who sobbed on staged said her little sister had always championed women, had a fighting spirit about her and was frank and outspoken.

“Your untimely passing has revealed to us the evil that exists in this world. Evil that has been allowed to thrive. Days like today project to us that we are living in dark times, especially in South Africa, with no clear direction as to where we are heading. Yet in such times we can find comfort in the word of God,” he said quoting Psalms 27.

Esona recalled when his late sister was missing, that he struggled to understand why that would happen to his sister.

“Why couldn’t I be there to protect her? But if you were to understand God and the working of his ways, then he wouldn’t be God. Although I have these questions, I pray one day these answers may be revealed to me,” he said.

He told mourners that he had always imagined his future with his sister, Uyinene, in it.

“I always pictured a moment when I would drop my kids off at my sister’s house for the weekend,” – he said before breaking down.

“One thing I will hold onto is that to your last breathe you were fighting. And I am sorry that I wasn’t there to fight for you, I am so proud of you. Your fight is now our fight, lala ngoxolo baby girl (rest in peace baby girl),” he said sobbing.

Uyinene’s father, Mabhele Mrwetyana, said they were very close and would cherish their long conversations and moments of laughter.

“You held me accountable my baby, you kept me on toes,” he said.

“We both loved jazz. We would converse about jazz and politics. You were inspired by Steve Biko on the principle of identity. You unified the family. You loved outdoor activities. You always opposed to any form of violence especially gender-based violence.”