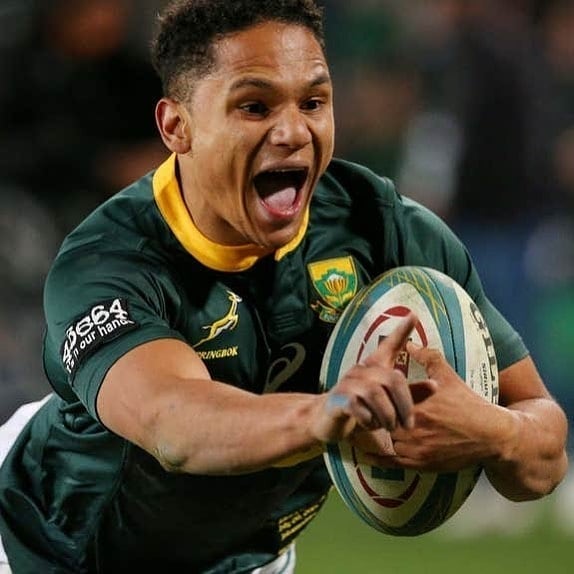 Defending world champions New Zealand and South Africa locked horns on Saturday in the most highly anticipated match of the opening weekend at the Rugby World Cup.

The teams went into the match with an even record at World Cups, both sides having won twice each across their four previous meetings at the global showpiece.

The last time the teams met in a World Cup, the All Blacks ran out 20-18 winners on their way to lifting the Web Ellis trophy for a record 3rd time.

Ahead of the encounter, Springbok coach, Rassie Erasmus had named an unchanged side for the first time since that semi-final at Twickenham.

New Zealand, on the other hand, made 5 changes from their final warm-up match against Tonga, with Richie Mo’unga (10) and Beauden Barrett (15) both named in the run on fifteen.

South Africa started the game on the front foot and took the lead inside 5 minutes thanks to a penalty from Handre Pollard.

The Springboks dominated possession early on but the All Blacks defence held firm. The defending world champions began to turn defence into attack and were awarded a penalty in the 23rd minute right in front of the uprights.

The All Blacks were gathering momentum and would eventually reap the benefits with George Bridge finishing off a well-worked move following a cross-kick from deep inside his own half by Mo’unga.

New Zealand crossed the whitewash for the second-time moments later as Anton Lienert-Brown did well to break the defensive line and offloaded to Scott Barrett who had an easy run in.

Despite playing most of the opening half inside the All Black’s half, South Africa went into the trailing 17-3 thanks to those two quickfire tries midway through the first 40 minutes.

South Africa made a confident start to the second half and were rewarded inside the opening 5 minutes again as Pieter Steph du Toit picked up the ball from the ruck and ran through unopposed to dot down under the poles.

Pollard converted to move South Africa to within 7 points.

The fly-half reduced the gap to 4 points 10 minutes later, nailing a drop goal from 40 metres out.

Mo’unga restored his side’s 7-point lead in the 66th minute with a well-struck penalty.

Beauden Barrett took over the kicking duties from Mo’unga inside the final 10 minutes and stretched the lead to 10 points.

Cheslin Kolbe looked the most threatening for the Springboks in the closing stages, making some good line breaks but South Africa weren’t able to make the most of the chances.

New Zealand holding on for 23-13 win on their opening match of the tournament.

South Africa’s next game is on 28 September against Namibia.

Sbahle Mpisane got a second chance at life and she is not taking a single moment for granted – Despite almost losing her life and now being bound to a wheelchair, Sbahle has not and will not give up on her goals and dreams – Sharing her journey, Sbahle has and continues to inspire many with her strength and positivity

Sbahle Mpisane is one inspirational slay queen. Neither an almost-fatal car accident nor a wheelchair is going to stop her from reaching her goals. The horrific accident that almost took Sbahle’s life also gave her a new perspective and a second chance at life. Sbahle is a completely new person because of it. continue reading
Source: News365
Related Topics:Rugby World CupSpringbok
Up Next