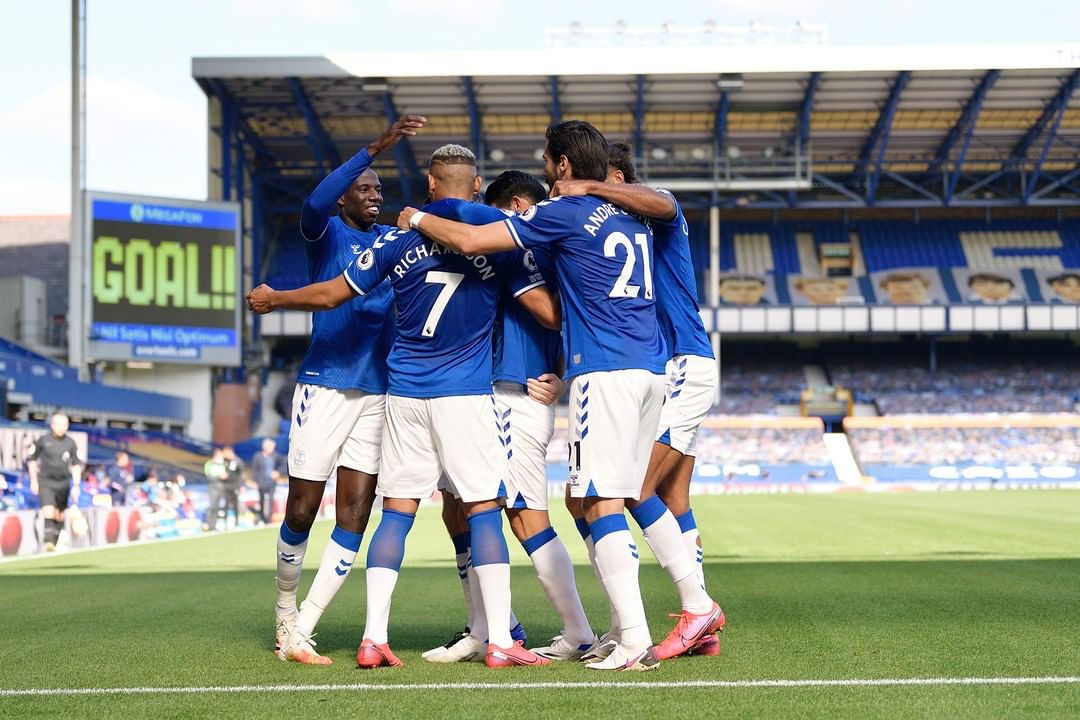 The Baggies took an early lead through an excellent solo effort by Grady Diangana, who broke from inside his own half before hitting a dipping effort beyond Jordan Pickford for his first top-flight goal. Dominic Calvert-Lewin hit a first career hat-trick and James Rodriguez scored on his home debut as Everton continued their impressive start to the Premier League season with a dominant win against 10-man West Brom.

Everton equalised midway through the first half when the video assistant referee overturned an offside decision after Calvert-Lewin cleverly backheeled into the net for his second goal in as many games.

Rodriguez then marked his home debut with a clinical finish on the stroke of half-time, sweeping a low effort into the far corner from Richarlison’s pass. A crazy few minutes at the end of the first half saw Kieran Gibbs and manager Slaven Bilic sent off for the visitors – Gibbs dismissed for pushing Rodriguez, and Bilic for remonstrating with the officials as they made their way off the pitch at half-time.

Despite that double setback West Brom pulled level straight after the restart when Matheu Pereira curled in a stunning free-kick, but parity was short-lived as Michael Keane stabbed in a loose ball after Sam Johnstone parried Richarlison’s header.

Calvert-Lewin then got his second when he slid in from close range after good work by Rodriguez and Richarlison and completed his hat-trick by heading in Rodriguez’s corner.

Everton have won their opening two league fixtures for the first time in eight years, while defeat for West Brom means they are still searching for their first points of the season. Early days, but Everton – and Rodriguez – look exciting After flirting with relegation and then limping towards a mid-table finish last season, Everton needed a big summer.

Despite the short turnaround, Carlo Ancelotti’s work in the transfer market has been impressive and the additions of Allan and Abdoulaye Doucoure already appear to have significantly improved their midfield just two games into the season.

But it is the signing of Colombian forward Rodriguez that looks set to be the pick of the deals, as well as perhaps the best bit of business completed this summer in the Premier League. Rodriguez caught the eye with his impressive footwork and vision in Everton’s opening win against Tottenham and built on that in this game as he was involved in three of the home side’s five goals.

His strike to make it 2-1 was one of real quality as, despite having four West Brom players in close attention, he took a touch before sweeping into the far corner from outside the box.

He then showed great vision for Everton’s fourth, lofting the ball into the box for Richarlison, who squared for Calvert-Lewin and was on hand again to provide the assist for the English striker’s third.

Ancelotti clearly is a manager who can get the best out of Rodriguez, who has now scored in four of Europe’s top five leagues, with his first goals in La Liga, the Bundesliga and now the Premier League all coming under the Italian.

And the former Chelsea boss appears to be having the same influence on Calvert-Lewin. The striker had not scored more than six goals in a season in his first three Premier League campaigns but got 13 last term – eight of those under Ancelotti – and already has four this season.

Baggies need to shore up defence

When West Ham sold Diangana to West Brom this summer, it prompted an unexpected and angry message on social media from Hammers’ captain Mark Noble, who said he was “gutted, angry and sad” that the club had decided to sell the youngster.

His goal against Everton showed just why Noble rated Diangana so highly and justified West Brom’s decision to spend £18m of their budget on the England youth international.

Diangana’s raw talent coupled with the creativity of Pereira – who with 17 assists is second only to Kevin de Bruyne as top creator of goals in English football since the start of last season – means the Baggies have attacking flair that could serve them well this season.

But they have now conceded eight goals in just two games and there will need to be a significant improvement in their defensive displays if they are to avoid an immediate return to the Championship.

Rodriguez made it look easy –

what they said
Everton manager Carlo Ancelotti to BBC Sport: “The game was not so easy. We had difficulties in the first half. West Brom were better than us. We had a good reaction. With the advantage of one more player we were more in control. “The players have come back with more ambition and motivation. The new signings have helped us be more motivated. Good momentum for us.

“I’m really pleased for James Rodriguez. A new country, a new league – it was not so easy. But he made it easy because he has a lot of quality. A fantastic player.” West Brom boss Slaven Bilic told BBC Sport: “We did so many mistakes we can’t do at this level.

“Why I’m frustrated is the way we were tactically in the first half, we were closing them down, passing the ball, the way we pressed them, it can’t be 2-1 for them. “To show that naivety to go down after we are 1-0 up and to get the red card is frustrating.”

A first for Richarlison – the stats

Everton will look to make it four wins from four in all competitions when they travel to Crystal Palace in the Premier League on Saturday, 26 September (15:00 BST), while West Brom host Chelsea on the same day (17:30 BST).

Leeds United win after beating Fulham in a 7-goal thriller