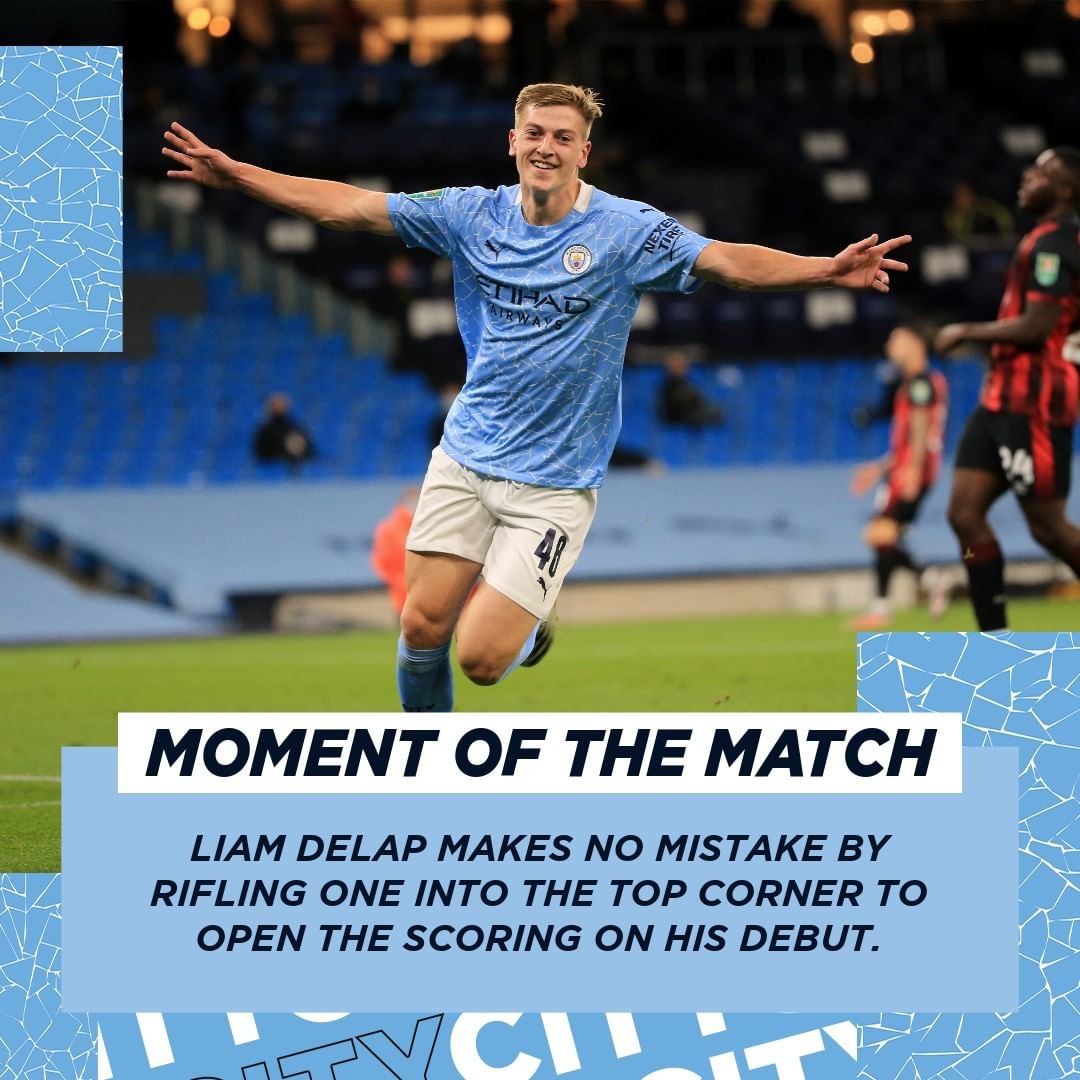 Young Man City team beat Bournemouth 2 – 1 to progress further in the Carabao Cup. The 17-year-old forward struck in the first half, latching on to Phil Foden’s fine ball before placing a composed finish beyond the goalkeeper. Sam Surridge equalised but Foden stabbed in the winner late on.

Liam Delap said there was “no better feeling” after marking his senior debut with a goal as defending champions Manchester City beat Bournemouth in the Carabao Cup third round.

“Since I was a boy all I dreamed of was playing senior football,” Delap said. “To make my debut tonight and get a goal, there is no better feeling to be honest.” Victory means City travel to fellow Premier League side Burnley in the fourth round.

Delap, who is the son of former Stoke City midfielder Rory, joined City’s academy in the summer of 2019 and has impressed at the youth level with his strength and explosive burst of pace. That was evident against Bournemouth as the forward caused the Championship side’s defence numerous problems.

Delap added to BBC Radio 5 live: “It was a bit of a shock to be put in the starting line up but I took it with a pinch of salt and just worked my hardest. “I’ve got to keep my feet on the floor, keep working hard in training.

“It is a good positive step for the future. The manager is including all the young boys in the squad and giving them experience, so there can’t be anything better.” City boss Pep Guardiola said he was impressed with Delap’s finishing during training.

“He’s a different striker to what we have in terms of physicality,” he said. “We see in training how good a finisher he is. Now he has to be calm and keep working. We are delighted with his performance – he played really well. ”

Young stars impress for City
Delap was one of five teenagers handed a start by Guardiola in a youthful City side that also included two 20-year-olds.

His goal made him City’s youngest debutant scorer in seven years, since Rony Lopes against Watford in 2013, but as impressive as Delap was, Foden was even more so with the 20-year-old the standout player of the match as he dictated play throughout.

Among all Premier League players since the start of last season, only Kevin De Bruyne (eight matches) and Mohamed Salah (six) have both scored and assisted in the same game on more occasions than Foden across all competitions (four).

Bournemouth, relegated to the Championship at the end of last season, gave a good account of themselves and could have perhaps taken the lead before Foden struck if Surridge had shot sooner when through on goal.

But this performance against a side that has won the competition for the last three seasons in a row will give them heart as they look to mount a challenge for an immediate return to the top flight.