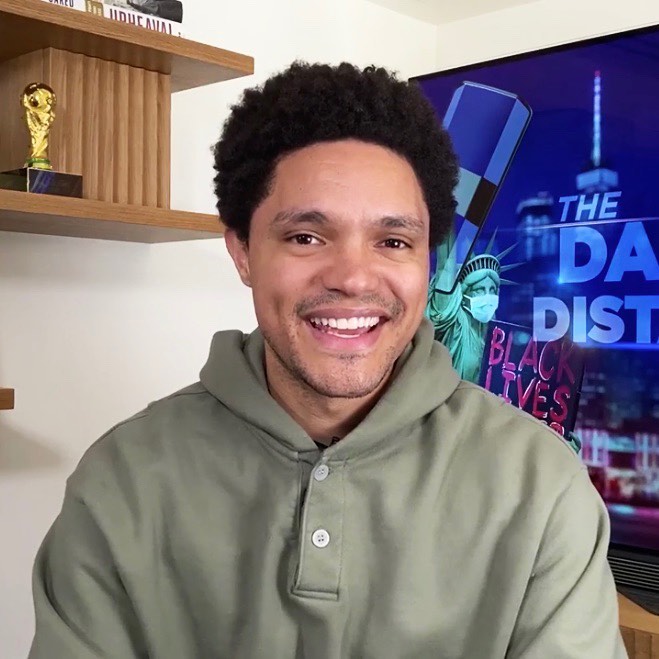 It has been 5 years since multi-award-winning SA comedian Trevor Noah, began hosting his renowned The Daily Show, which is filled with dose of unfiltered humor.
In 2017 Trevor signed a 5 year deal to host the show taking over from Jon Stewart, and it has been an interesting ride.

In a statement he expressed how excited he was, to continue hosting the show, “I’m thrilled to be continuing this amazing journey with both fans of The Daily Show and Comedy Central. It’s really exciting to renew this contract for either five more years or until Kim Jong Un annihilates us all–whichever one comes first.”

Celebrating his milestone today, he shared a post on Twitter and captioned it, “Yesterday marked 5 years of hosting @thedailyshow. Beyond grateful to everyone who’s been with me on this ride!”

Yesterday marked 5 years of hosting @thedailyshow. Beyond grateful to everyone who’s been with me on this ride! 🙏🏽 pic.twitter.com/7RhTzoaC7y

There’s no denying that the South African born comedian remains one of the most pioneering comics within the landscape of comedy in South Africa. Trevor recently scooped awards for his show at the renowned Webby Awards 2020.

The multi-award-winning comedian is a trailblazer of note and he recently bought himself a R278 million crib, proving that his career is soaring abroad. Also, on a global scale, Trevor has made his presence felt with his trailblazing antics and he continues to knock his dreams and goals out the park.

The comedian is rumored to be off the market and he is alleged to be in love with American actress Minka Kelly According to E! News source, the lovebirds have been seeing each other for several months now. Trevor was previously romantically linked to singer Jordyn Taylor, but in 2018, they called it quits. In an Instagram live, Jordyn let the cat out of the bag that they had separated.

Amongst the many other things Trevor has been able to achieve is writing his on book, Born A Crime. The memoir tells tales and stories from his childhood. He recounts multiple tales of him growing up with his family in the dusty streets of Soweto.

Congratulations Trevor, and keep on flying the SA flag high