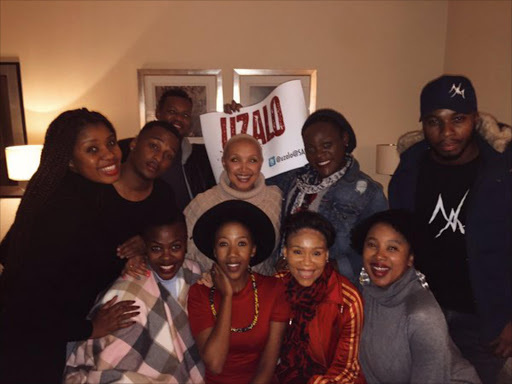 Qhabanga and Nkunzi place each other at death’s door – one of them has to die. Khathaza and MaNgcobo have to reach an agreement on the Steleka issue and it’s not easy.  Uzalo airs Mondays to Fridays on SABC1 at 20h30.

MaMlambo and Qhabanga are both conflicted about marrying each other. Nosipho gives in to Njeza’s romantic advances. Fikile and Sbu can’t agree on what to do with their pyramid scheme earnings.

The discovery of the murdered Nokwanda turns the community upside down and makes Mondli’s suspicions flare. Zekhethelo struggles to make sense of her sister’s betrayal and Fikile’s flashy spending spree gets her into trouble.

A pest dies taking chances; a hopeless romantic gets arrested and two lovebirds homeless by circumstance seek shelter amongst grease, petrol and a whole lot of metal.

Gabisile faces the worst humiliation ever for a bride-to-be. Khathaza and MaNgcobo make a pact that solidifies their love.

Love triangle is far from over, Ntaba’s death threatens Khathaza’s new family, Zekhethelo and Nosipho must bury the hatchet.

Khathaza is shocked by what he finds waiting for him at home. Qhabanga breaks down, and Fikile and Sbu are caught.

Nkunzi takes the first step to getting his life back, Gabisile refuses to be alone, and Sbu and Fikile find themselves on the run.

Khathaza turns his attention to Qhabanga. Sibonelo asks an enemy for help, and Sbu and Fikile keep running.

Nkunzi digs for the truth, the board has bad news for Qhabanga, and Fikile struggles with her current reality.

Nkunzi finds himself staring death in the face. MaMlambo makes a huge mistake and Mondli puts Zekhethelo in a tricky position.

Gabisile kicks Qhabanga while he’s at his lowest. Nkunzi is determined to get revenge, and has a solid plan for the Khanyiles.

Sbu gives up Kuvukiland to stay with Nkunzi. Mr. Mbatha starts his job as a pastor. Gabisile wants to be Nkunzi’s wife.

Qhabanga is discharged from hospital and yet again turns to alcohol for comfort and solace. Mbatha’s enthusiasm results in him preaching for hours on end thus boring the congregants.

Nkunzi realises that he needs to immediately get rid of MaNgcobo but circumstances do not allow him to. Gabisile enjoys sidelining MaMlambo from her wifely duties.

Khathaza gets robbed of a prized possession and this leaves MaNgcobo fuming. Gabisile finds another way to cause a rift between MaMlambo and Nkunzi.

Nkunzi threatens to kick out MaMlambo. Sbu does not want to circumcise. Khathaza strangles MaNgcobo.

Gabisile keeps finding more ways to torture MaMlambo and loves every minute of it. Sibonelo wants to apologise to Nonka for hurting her but learns that she too has moved on from him while Sbu chickens out of getting circumcised.

When secrets, plots and half-truths reign, not even love is enough.

Khathaza puts his manhood to the test.

Gabisile continues to make MaMlambo suffer by using Mazaza. Sbu thinks sleeping in a onesie is the only way he can hold himself from wanting to have sex with Fikile.

Qhabanga and Nkunzi place each other at death’s door – one of them has to die. Khathaza and MaNgcobo have to reach an agreement on the Steleka issue and it’s not easy.  Uzalo airs Mondays to Fridays on SABC1 at 20h30.