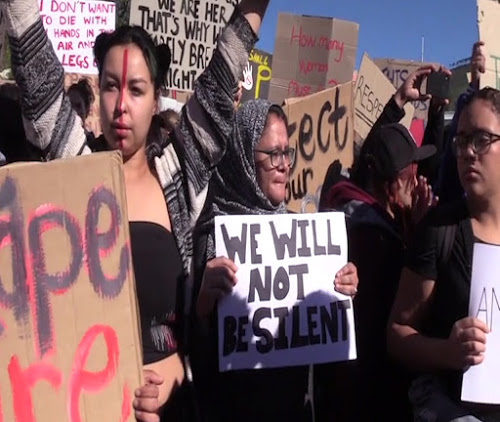 The Justice for Women march – along Durban’s beachfront – was arranged by seven women who were “outraged, shocked, hurt, confused and angry at the way men have been treating women”. Men, women and children – dressed in black – walked along the promenade with placards which called for an end to the abuse of women. The end of women’s month was deafeningly concluded with the end of yet another woman, Uyinene Mrwetyana’s life.

“Although we didn’t know her – or all the scores of South African women who have been harmed, harassed, assaulted, raped or murdered by men – we felt as though the brutal blowing out of her candle was another blow to our kind. Another blow to us,” said Jade O’Shea, one of the organisers in a Facebook post.

“The consequence of our culture had incited a collective consciousness. Every single woman we spoke to felt the same.” O’Shea said the march was in response to their outrage.

“We are not event organisers. We are not activists. We are seven women who invited other people that feel the way we do, to walk with us at the beach, on a Saturday morning – and 3000 people agreed,” she said.

Idols SA judge Somizi Mhlongo has joined the chorus of outrage over the xenophobic attacks that have erupted across Mzansi this week, claiming that it is “our own blood that we are killing”. TimesLIVE reported this week how widespread looting and violence erupted across various parts of SA as locals and foreigners clashed.

Somizi joined dozens of celebs in condemning the violence against foreign shop owners and in an Instagram post said that those who had divided Africa were celebrating the violence. Read more