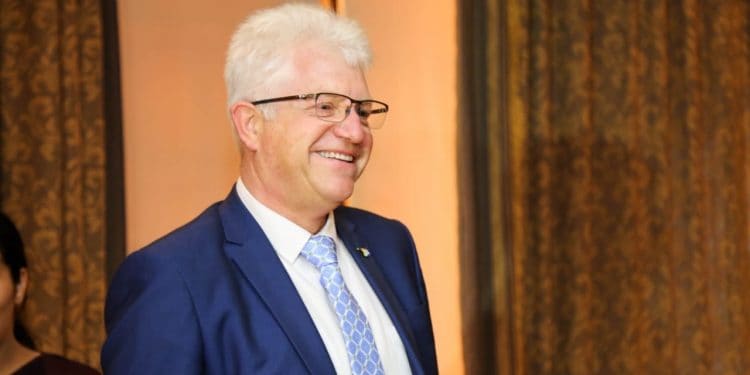 Western Cape premier Alan Winde received a glowing review from an unlikely source in parliament on Wednesday: Deputy President David Mabuza. Mabuza was answering questions from MPs in the National Council of Provinces when he uncharacteristically heaped praise on Winde, a DA member, who was elected premier of the Western Cape four months ago.

Mabuza described him as a good man who was focused – and the best premier the DA had ever selected. He was responding to a question from DA MP Hildegard Boshoff, who sang the praises of the Western Cape government as it related to economic growth. A bragging Boshoff asked Mabuza whether he would reach out to Winde and meet the premier to brainstorm ideas that could be implemented in ANC-led provinces.

Naturally, ANC MPs heckled her as she asked the question. But to everyone’s surprise, Mabuza acknowledged the successes of the Western Cape government, saying that if there were good examples in one place, they should be taken across the entire country so that the nation could put its economic strategy on track. Mabuza said he was open to meet Winde for discussions and in fact was already planning to do so.

“I can tell you, the few interactions that I had with the premier, I felt very encouraged. He is a good man, very positive, is not really playing politics while he is on duty. He is focused. I can tell you that this time you’ve made a good selection of premier,” he said.

Mabuza’s praise for Winde was no fluke, it would appear. Later on in the session, when another DA MP, Tim Brauteseth, pointedly asked Mabuza whether he supported a DA programme to skill young people, the deputy president again responded in the affirmative.

“Would you agree with a DA initiative and a DA idea to roll out a voluntary national youth service? So when you leave school, you can work in the inner governance-related sector – whether it’s a hospital, a state farm or police station – in service of your country for a year but, most importantly, picking up youth skills?” he asked.

Brauteseth was referring to the Premier’s Advancement of Youth (PAY) programme, which sees hundreds of matriculants working in the provincial government’s departments for a year to gain workplace experience, while earning a stipend. The programme is meant to give them experience, which makes it easier for them to enter the job market later. Definitely – it’s a good initiative,” responded Mabuza.

The deputy president said the private sector was the ideal place for young people to work and gain experience and that the government should encourage it to hire young people – but if the Western Cape government had a budget to employ young people to give them experience, then that was a good thing. But for now, I’d say it’s a good initiative under these circumstances,” he said. Winde told TimesLIVE that he and his government appreciated the vote of confidence from the deputy president. He said they would keep working hard to fulfil their promises to the voters and the people of the Western Cape, and to make a positive contribution to the rest of South Africa.

Deputy President David Mabuza says the government is ready to start its land reform programme, including expropriation of land without compensation. Mabuza emphasises that all land redistribution will take place within the confines of the law.

It was the first time the deputy president has fielded questions in the National Council of Provinces in the sixth democratic Parliament. Read more