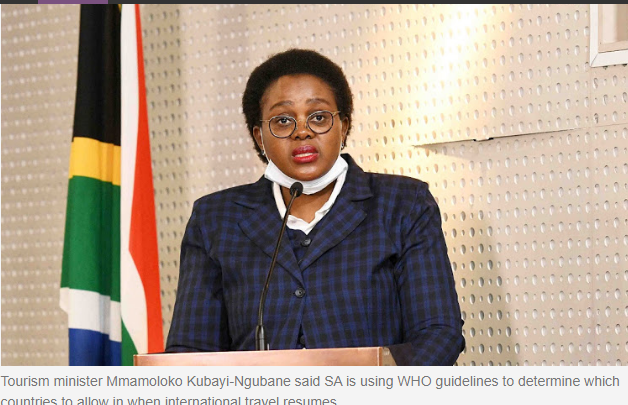 The US, the UK, France, Brazil and India – these are some of the countries that could be barred from sending travellers to SA when international travel resumes on October 1.

And as global airlines prepare to fly into the country once more, Abu Dhabi-based Etihad Airways said its crew will be clad in full personal protective equipment [PPE] when processing passengers.

The Sunday Times understands from senior government sources that there are
serious discussions about which countries to allow in and which ones to place on the high-risk list, amid concerns that barring SA’s closest trading partners could risk “diplomatic issues”.

On Friday, co-operative governance & traditional affairs minister Nkosazana Dlamini-Zuma released level 1 regulations stipulating that all countries in Africa will be allowed in, but other countries with high infection rates will still be barred from SA.

The list is being compiled by health minister Zweli Mkhize in conjunction with other relevant ministries and will be gazetted before October 1.

All arriving travellers will be required to produce a negative Covid-19 test conducted at most 72 hours before departure.

Senior government insiders said there have been discussions about how to accommodate SA’s Brics partners – Brazil, Russia, India and China – and whether they should gain access as a bloc.

“The argument is, do we continue trade and tourism based on our Brics partnership or do we close our doors and risk diplomatic issues?” said a senior government insider who asked not to be named.

Others with intimate knowledge of the discussions said it would not make sense to include Brazil and India, which have the second- and third-highest global infection rates, while placing the US and some of the major EU countries on the high-risk list.

Speaking to the Sunday Times on Friday, tourism minister Mmamoloko Kubayi-Ngubane said SA is using World Health Organisation guidelines to determine which countries to allow in when international travel resumes.

The WHO advises countries resuming international travel to consider transmission patterns, national public health and social measures for controlling outbreaks in both departure and destination countries, and public health capacity to manage suspected and confirmed cases among travellers, including at airports and other points of entry.

The tourism minister said individuals from countries considered high risk can be allowed into SA if they can prove they have investments here or are coming for strategic work.

“If country A has been categorised as high risk, someone who has invested in South Africa and has to come and check their project, they are able to apply to the home affairs minister to say I have an investment and want to check on it. The minister can approve for that person to come, provided they produce a negative test within 72 hours of travel,” Kubayi-Ngubane said.

The high-risk list will be reviewed every two weeks. If a banned country’s infection rate declines, it will be moved off the list.

Meanwhile, Abu Dhabi-based Etihad has published a safety guide for passengers. The airline’s SA country manager, Karlene Barkley, said the measures include supplying “wellness kits” of masks and sanitisers to passengers, crew in full PPE gear and all on-board food tested and served according to accepted health guidelines.

South African travel and tourism players said this week they are now anxiously waiting for the government to release the list of countries whose citizens are welcome in SA.

“It will be critical,” said André Schulz, Lufthansa’s general manager for Southern and East Africa. Schulz said the airline – which has been operating weekly repatriation flights throughout the lockdown – has seen a steady increase in inquiries about return-trip tickets and commercial flights.

He said the list of high-risk countries is intriguing as banning US travellers, for example, could be interpreted as not supporting that country, which could create negative sentiment in an important market for SA.

“It will also be interesting to see how the market reacts and if it’s like it was when domestic travel started up again.”

South African travel companies said local travellers are being cautious while they wait for the government to publish the high-risk list, as this might also affect outbound travellers from SA. “People are waiting to see which countries they are allowed to travel to,” said Pentravel marketing and product manager Vicky Steinhardt.

Kubayi-Ngubane said the resumption of international travel will not immediately bring back all the 10-million-plus travellers who used to arrive in SA annually, but it is crucial to save a battered sector.

Smaller outlets such as bed-and-breakfasts were hardest hit as they did not have the cash reserves to survive six months of lockdown, she said, but she is confident that in areas that rely heavily on international tourists, most of the establishments that were shut down will reopen once international tourists return.

SA, she said, is a destination that offers a variety of attractions, and international tourists can take advantage of that.

“Destination South Africa in terms of products is very diverse. What we are analysing is that the international traveller will not want to move from one country to another, but will want to remain in one country. With everything that we offer, we believe we can become a destination of choice. We offer wildlife, nature, coastal areas, cities, mountains, etcetera.”

A number of African countries have already indicated to the government that they are ready to receive flights and travellers from SA. The continent accounts for 71% of all inbound travel. For global tourists, the fear is that their countries could require them to quarantine upon returning home, which might discourage them from travelling to SA, Kubayi-Ngubane noted.

How much money do domestic workers earn in South Africa?