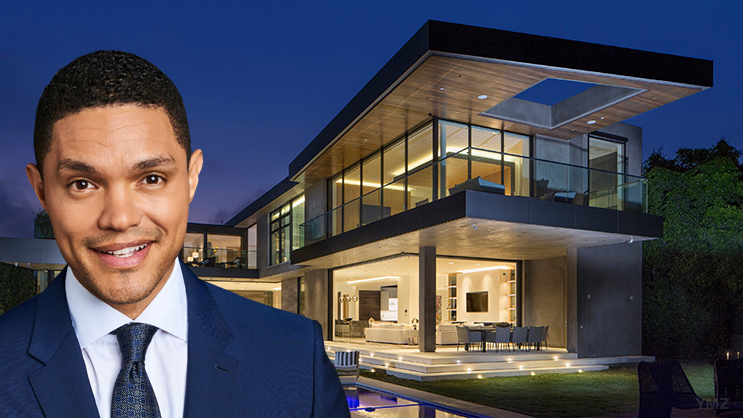 South African born comedian Trevor Noah has reportedly sold his glamorous mega-mansion in Los Angeles for a $21.7 million. That’s a whopping R351 million. The star made headlines last year when he bought the house for $20.5 million (R279 million at the time).

According to Variety, the house was never available on the open market, so it’s not clear what changes Trevor made to it before selling. This wasn’t the only house in Trevor’s impressive portfolio, as he also owns a fancy penthouse in New York, from where he’s been shooting “The Daily Show” during the Covid-19 pandemic.

Trevor shelled out about $11.49 million (R130m at the time) in 2017 for the ultra-luxurious apartment in Manhattan. According to The Wall Street Journal, the apartment has impressive views of Midtown and Downtown Manhattan from the master bedroom and terrace.

The iconic Empire State Building is also visible from a “cast iron tub in the master bath”. Earlier this month, Trevor made it onto the Fortune 40 Under 40 list of the most influential people in the world.

The prestigious list highlights some of the world’s most powerful emerging leaders in the categories of finance, technology, health care, government and politics, and media and entertainment.

Reflecting on Noah’s career, the publication hailed him as “one of the most visible comedians in the US and beyond”.

Stunning Minnie Dlamini’s photoshoot showing off her Baby bump. Minnie Dlamini-Jones revealing her pregnancy has become the gift the keeps on giving and we are all here for it. First, it was the baby bump making its television debut with the same dress that Minnie wore during her 30th birthday quarantine celebrations.

Check the stunning pictures of her pregnancy photoshoot below…Learn More.

Jennifer Lopez has still got it see sizzling swimsuit pic