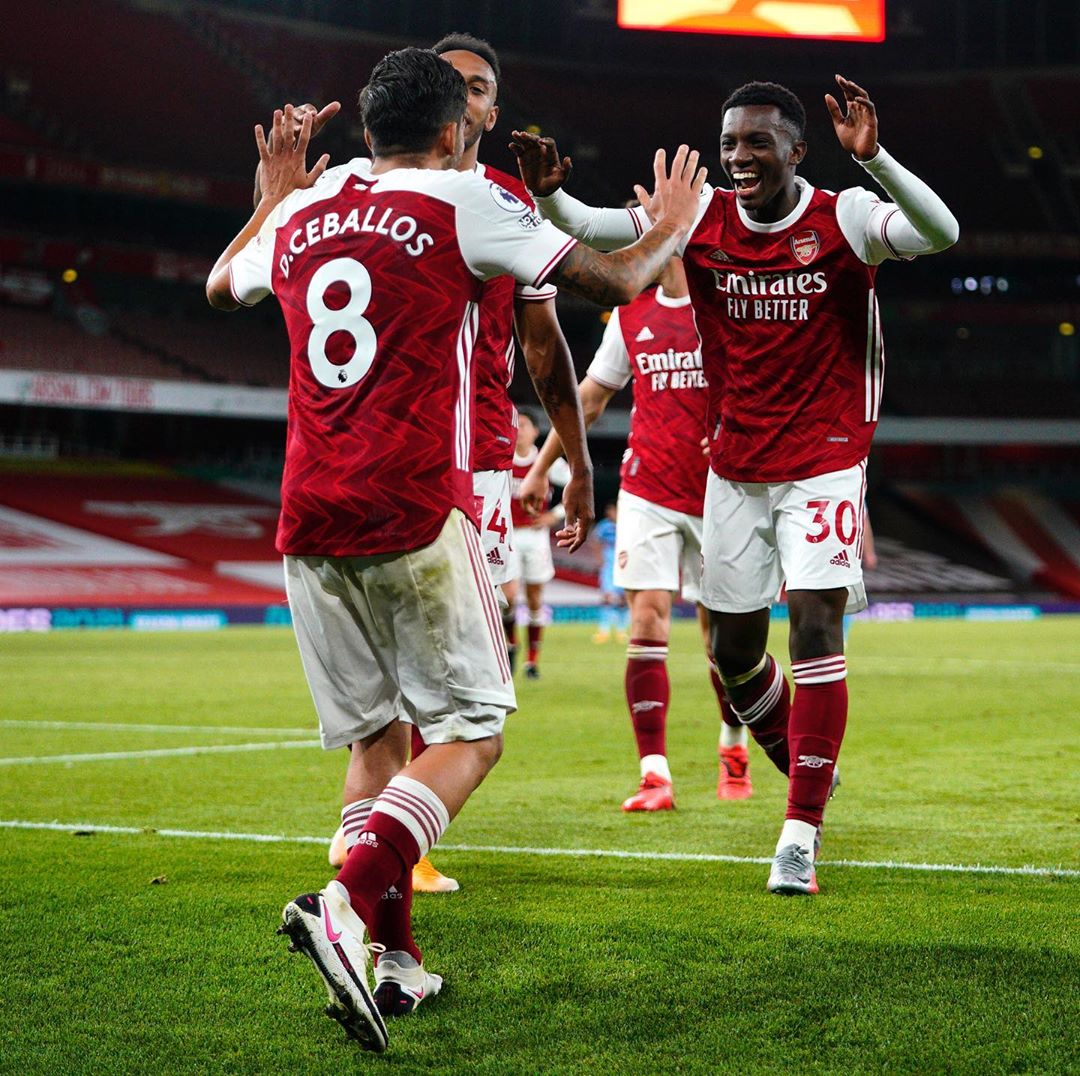 Last weekend, Dani Ceballos and Eddie Nketiah came to blows in a skirmish during the warm-up at Fulham. Seven days later they were dovetailing to devastating effect to give Arsenal a victory they did not deserve.

Five minutes from the end the change had its desired effect, Ceballos finding space inside the area and laying the ball to his right for Nketiah to tap in. For Arsenal it was an escape; for David Moyes it was a sucker punch on a night when his players shrugged off the disconsolate atmosphere around their early-season form.

The world has changed considerably since, on 7 March, West Ham narrowly lost here in the sides’ final match before lockdown. Lacazette’s opener was a reminder that some things, at least, remain familiar. Six months ago he scored a potential winner that was granted after a lengthy VAR check overruled the assistant referee’s flag; now he found himself on the right side of the technology again.

It was slickly worked, Bukayo Saka weighting a through ball down the inside-left to Pierre-Emerick Aubameyang. The captain, newly contracted until 2023, was on point with his chipped delivery and Lacazette raced in to batter a header Lukasz Fabianski had no hope of repelling. The check at Stockley Park was prompted by suspicions Aubameyang had been offside in receiving the pass. Replays suggested part of his upper body might have strayed ahead of the defensive line; it was tight and goals have been chalked off for similar infractions, but this one eventually stood.

In another throwback to the previous meeting, West Ham had been the better side until then. That is not to say much given the lack of genuine goalmouth action in those first 25 minutes. But Moyes sent out a side that defended with discipline and was judicious in choosing when to probe. They were without Mark Noble, absent with a toe injury, but a late withdrawal from Arsenal’s XI aided their cause.

Kieran Tierney had sustained a tight hip in the warm-up and Sead Kolasinac took his place at left centre-back. The new arrival was given a lengthy pep talk by Gabriel Magalhães but the home defence appeared foggy early on. Within four minutes Arthur Masuaku had scooted past Gabriel too easily and won a corner that was headed down and then, via Angelo Ogbonna, nodded at Bernd Leno from a good position. Gabriel also looked uncertain when Jarrod Bowen threatened to get a shot away and, while that was about it for excitement, West Ham had a foothold.

It was snatched away by Lacazette but Moyes’s side kept plugging away. They screamed for a penalty when the ball appeared to strike Gabriel’s arm and were worthy of their equaliser, which came right on half-time. Arsenal’s defending left plenty to be desired as West Ham advanced down the right, Kolasinac failing to pressure the ball, but Ryan Fredericks’ centre was perfectly angled and Antonio stretched to sweep past Leno in the Arsenal goal.

Saka had shot over shortly after Lacazette’s goal but Arsenal had generally struggled for rhythm. They re-emerged with greater purpose but openings were still scarce. After one lengthy passing move resulted in Saka being caught offside, Moyes and his staff loudly applauded their team for holding its shape. Seconds later they were almost celebrating with much more gusto, Masuaku crossing deliciously from the left and Antonio jabbing into a grateful Leno’s arms from a matter of feet. On the hour it was Aaron Cresswell’s turn to whip over beauty and Bowen, meeting Tomas Soucek’s knockdown, could not make good contact when well placed.

One of Arsenal’s problems, symbolised when Aubameyang sent the ball over for the diminutive Willian and saw West Ham clear easily, was that their prize asset was not getting close enough to goal. Another was that Willian himself was far less involved than at Fulham last week. He was replaced by Nicolas Pépé as Arteta sought a spark. But it was Antonio who nearly provided that for West Ham, heading against the crossbar before Leno blocked Bowen’s follow-up.

On came Nketiah and, after more good work from Saka created the space for Ceballos, Arsenal’s hero was made. For long periods this had been a tale of just how far Mikel Arteta still needs to take them; by the end, though, the squabblers of Craven Cottage had ensured it was happy families again.

Leeds United win after beating Fulham in a 7-goal thriller