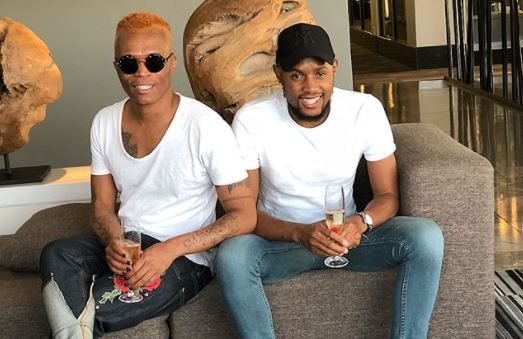 Somizi and Mohale are expected to tie the knot next week, weekend media reports say. According to City Press sources, the couple will hold the first of two wedding ceremonies on September 28, with a white wedding set for January.

The traditional ceremony will apparently be held at Mohale’s parents’ home. Details surrounding the white wedding in are sketchy.

Who is going to be there and who is going to perform?
With an event as big as this, some of Mzansi’s biggest names are set to attend.

A few months ago, the couple revealed that they had invited President Cyril Ramaphosa to their white wedding. While the full guest list is a secret, Somizi has spilt the tea on who will perform.

When do the invites go out?
The invites, designed by Liquid Image Consulting, are out.
How long have they been engaged?
The pair have been fiancé-ing for more than a year, after Somizi popped the question in March 2018 at the Pont des Arts (love locks) bridge in Paris, France.

They threw a party in October, bringing their families together.

Will there be a wedding special?
There was speculation shortly after their engagement that they would follow in the footsteps of Minnie Dlamini and have a TV special of their big day.

However, reports that the pair had signed a R3m deal with Mzansi Magic were quickly dismissed by the broadcaster.

“Somizi Mhlongo is a member of the Mzansi Magic family, even though we do not have a contract to broadcast his wedding, we would be honoured to share in the celebrations of his special day,” Head of PR at M-Net Nondumiso Mabece told IOL in a statement.

Have there been any hiccups?
Somgaga has dismissed hate that Mohale is only with him for the fame and money, and both are fiercely guarded when it comes to their wedding.

Responding to the hate, Somizi said he was older and wise enough to know when he was not truly loved.

“Most of you who are busy saying things about him would not hesitate taking his place should the opportunity arise. You never think that someone like him can love someone like me genuinely. You always place material gains in everything. And even if that was the reason, so what? Am I complaining? [You’re] busy saying he’s using me for money. Hayi suka niyakhathaza,” he added.

Last nights’ episode of Idols SA would have made a few shed a tear or two. This caused by the theme that many resonate with.

The ‘inspirational hits’ theme helped top 10 contestants and Idols as a whole to remember the late Thami Shobede. Read more

Jessica Nkosi confirms split from TK Dlamini: ‘I am no longer with the father of my child

Viewers expected a better Tribute for Thami Shobede on #IdolsSA